Living Wage for the Horticultural Industry 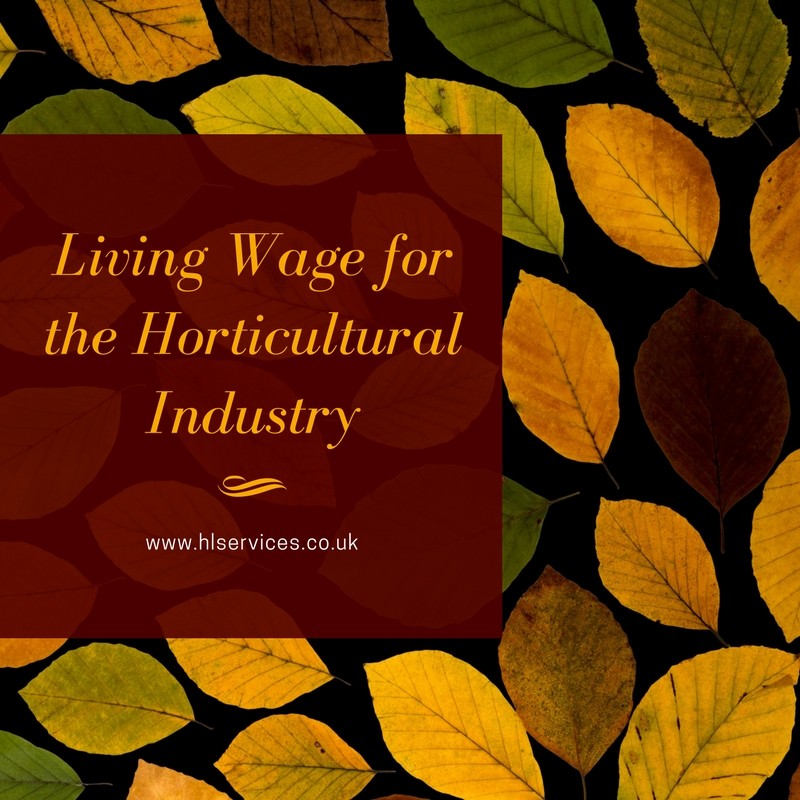 Living Wage for the Horticultural Industry

To start with, horticulture is defined as the science and art of growing plants which include flowers, vegetables, fruits and any other cultivar. Compared to agriculture, horticulture does not include animal husbandry or large scale crop production whereas horticulture includes landscape restoration, landscape and garden design, construction, and maintenance, plant conservation, and soil management. Usually, horticulturists work as gardeners, growers, designers, therapists and technical advisors also in the food and non-food sectors of horticulture.

The horticultural industry is involved in the production, processing and also the shipping of and the market of vegetables and fruits. The horticulture industry is one of the industry that is being significantly affected by the living wage that was introduced. The Living Wage is the obligatory minimum wage that is payable to workers and necessary for a worker to meet their basic needs. Though, the term ‘needs’ tend to vary, and the definition is not universally accepted for a particular measure as some have defined needs to include shelter, food, and others such as clothing which some may not reckon with. Nonetheless, in some nations such as Switzerland and the United Kingdom, it means that a person working 40 hours in a week, without an additional income should be able to afford the basics for quality of life which include food, shelter, transport, health care, utilities, etc. However,  since the enforcement of the living wage, many experts believe that it could hasten the departure of many from the industry as a result of the sums that fail to add up. Horticulture as an industry has seriously been shaken by the living wage and its unanticipated consequences as there are issues of untold problems that will ensue as a result of its implementation.

The Living Wage came into force some years now and the repercussions for the UK fresh produce sector could be devastating. It can be argued that more than any other industry extant UK horticulture is constantly subject to unforeseen arrows of uncertainty and especially those involved in the fresh produce sector take whatever is thrown at them with admirable fortitude.

The introduction of the Living Wage and its unanticipated consequences have seriously shaken the horticulture industry, with many speaking of some problems that will arise as a result of its implementation. The living wage came into force, and this means that workers aged 25 and above are entitled to a minimum pay of £7.20 per hour – 50p higher than the previous minimum pay, which continues to rise over the coming years and it’s expected to reach well over £9 an hour by the year 2020. One of the obvious problems when it comes to the fresh produce industry is that the industry labor costs account for between 30% to about 65% of all these costs. This is quite unusual, and the problem is exacerbated when it becomes obvious that consumers are unlikely to be able to accept an increase in the price of their carrots, apples and the like.

Some might even respond by arguing that people in every sector deserve a fair day’s pay for a day’s work (or say a hard day’s work) and that no one in the fresh produce industry is stating otherwise. People have to be paid better and also there should be less reliance on the state. It’s a great political ambition. Nonetheless, at some point, somebody has got to generate income that will be sufficient to pay it. And the only way to be able to do that is to charge the beneficiaries of those higher wages more for their products.

The horticulture industry strives to pay its workers fairly and competitively. However, the living wage and many more new employee requirements will compel industries to review their current labor practices. It’s therefore essential that they keep on maintaining their commercial viability in a highly demanding and cost-sensitive sector. Nonetheless, since the sector cannot be complacent it’s essential that the customers and consumers will have to value the exceptional choice and the true value of the products the horticulture industry has gradually grown and nurtured for their enjoyment.

The savings will have to come from other parts of the business, investment will seem to slow down and then they will have to look to cut costs wherever they can. However, both are naturally found to be detrimental to the long-term value of any business, the industry and subsequently the country’s increasing need for a strategic and effective fresh produce industry.

Labour-intensive crops which are produced such as hand-picked fruits, vegetables, flowers and plants, these all have their seasons and can also determine what period the industry makes more profit. The industry is not against the national living wage, but it is concerned that the speed of the living wage implementation and also the lack of consultation will have a devastating impact on the horticulture industry.

The horticulture industry seeks to ask the government about eight things.